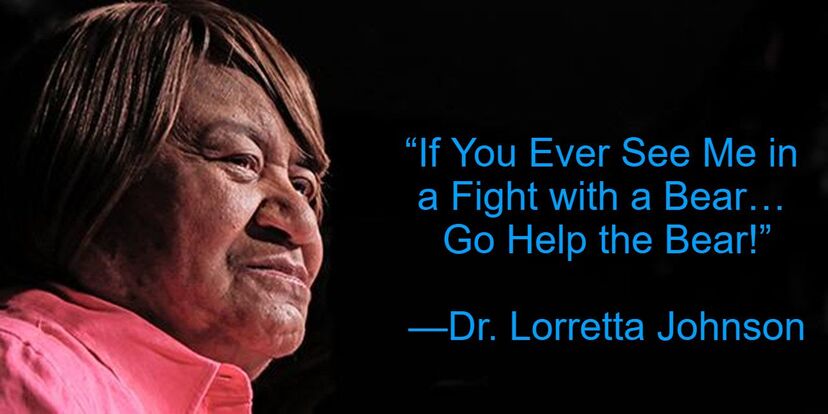 ​This lesson introduces students to Dr. Lorretta Johnson, a leader in the American Federation of Teachers for more than four decades. Johnson grew up in the city of Baltimore and began her career as a classroom aide in the Baltimore City Public Schools. As a union leader and civil rights activist, Johnson has broken new ground, opened doors and been the voice for the voiceless. ​She has empowered all of those who work and learn within the four corners of a school building, particularly the “hidden workforce” of cafeteria staff, maintenance workers, teacher aides, bus drivers, librarians, secretaries, band leaders, sports coaches, patrollers and security guards. Her success has been a result of her sense of justice and commitment: her commitment to family, to community, to ensuring that young African American men and women succeed in life, and to fighting for the rights of children worldwide exploited in child labor and human trafficking.
Step 1: Hook (5 minutes)​​
Dr. Johnson is well-known for her negotiating skills and getting to “yes.” In every part of life, negotiation is an important skill… and at the heart of negotiation is finding what we have in common to be more worthy than what sets us apart.  In this exercise, divide the class in groups of four to six. Their assignment is to find something in each group that they all have in common—for example, perhaps they are the fans of the same sports team, music, fashion, social media platform or store, or maybe they attend the same religious or community center. Emphasize that finding something in common is always the first step in moving forward from any disagreement. ​To follow up, groups can write their consensus item and post them on the classroom wall.
Step 2: Profile of Dr. Johnson (20 minutes) 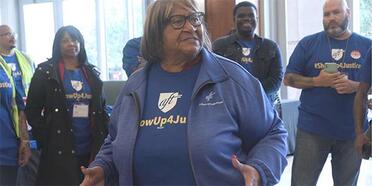 Dr. Johnson started her career in 1966 as a teacher’s aide in a Baltimore elementary school, where she earned minimum wage and received no benefits. To improve the work situation of the hidden workforce in our schools, such as office personnel, support staff and teacher aides like herself, she negotiated their inclusion into the Baltimore Teachers Union, where she subsequently became president. In 1970, she negotiated the union’s first contract. That experience laid the foundation for Johnson’s union activism, even up to this working mother of six being arrested, in 1974, for civil disobedience for supporting the union. Later, she became executive vice president of the American Federation of Teachers, and in 2011 she was elected secretary-treasurer, the second-highest position in the AFT.


As a fighter and champion for labor and civil rights, long before society’s awareness of the Black Lives Matter movement, Johnson has always been in the forefront to address racial inequality, educational inequities and the school-to-prison pipeline. Under Johnson’s leadership, the AFT produced a groundbreaking report on racial equity in the United States, “Reclaiming the Promise of Racial Equity in Education, Economics and Our Criminal Justice System.” 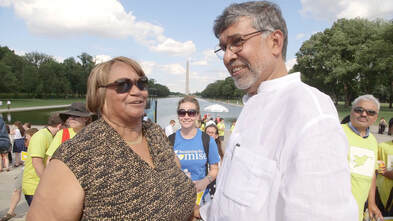 ​Dr. Johnson is co-chair of the Child Labor Coalition, an organization deeply engaged in the fight to keep children in schools worldwide, and out of the factories and fields. “We’re encouraged by our progress,” she says, “but we cannot rest until every child is in school and we have ended the worst forms of child labor so that children who work now can focus on their education.” Johnson has worked closely in the fight against child labor with Nobel Peace Prize laureate Kailash Satyarthi (pictured), who speaks about his partnership with Johnson here (3 minutes).  In 2010, when parts of Haiti were destroyed by a terrible earthquake, Johnson worked with Public Services International to construct a clinic in Port-au-Prince to provide primary healthcare to the children of government workers. Video (3 minutes)

In recognition of her lifetime’s work in support of social justice, Johnson is the recipient of the AFL-CIO’s “At the River I Stand” award, honoring her decades of commitment to civil and human rights, peace and freedom.
Step 3: Questions for Discussion (15 minutes)
Watch this short video that reviews Johnson’s career fighting for social and racial justice: video (5 minutes). Have students consider:
Step 4: What Can Students Do ? 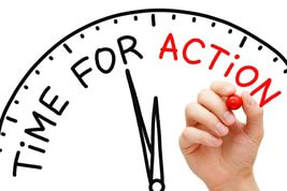 ​Use this step to expand on the legacy of Johnson and her fight for civil rights. Contacting and working with your local NAACP office will be key to this exercise. The office will help guide you in finding people whose lives have been connected to the drive for social justice and fairness in your community.

Divide the class into teams. Each team is assigned to conduct an interview with someone in the community who is an advocate for social justice and racial equality.

Students will use their interviews as information to create presentations about the community that could include drama, poetry, podcasts, poster displays, comic strips or music.

Here are two options for your students to join in with students from around the country working on similar projects: RFK Human Rights Video Contest and RFK Music Composition Contest.
Additional Resources and Materials